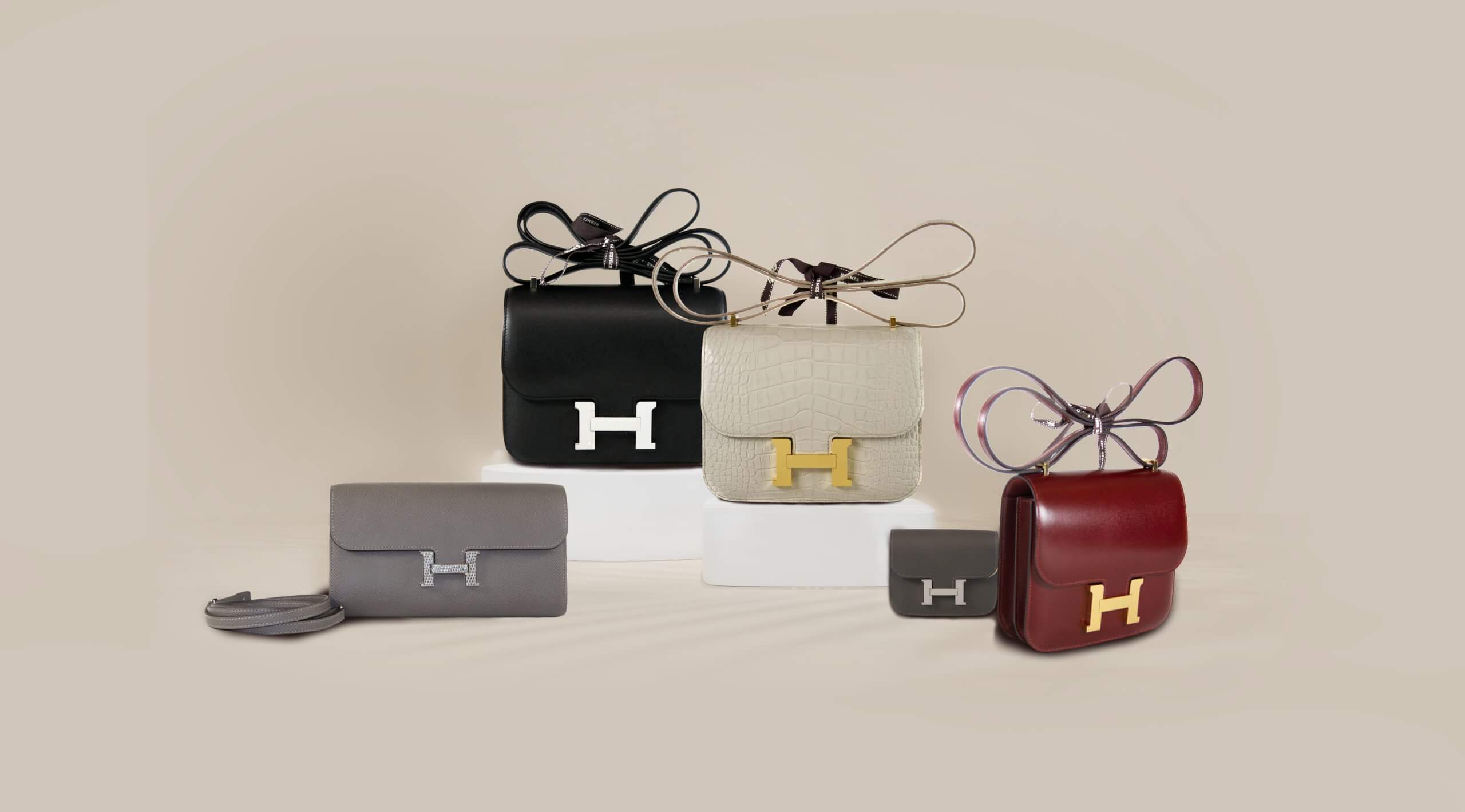 Hermès Constance: The Hermès bag with the special magic.

Constance is a multi-generational bag that is passed down from mother to daughter, stays in the family and is truly a treasure. The compact, sporty shape of the Constance bag, as well as its unique H clasp, makes it an iconic product from the house of Hermès. This post is about the bag in the second row behind Kelly and Birkin, which is actually also a queen. Learn more about how it’s made, the materials used, the unique limited designs and the Constance family.

Constance Bag: More than a bag

Jean-Louis Dumas, son of one of Emile Hermès’ four daughters, joined the prestigious house of Hermès on Rue Faubourg Saint-Honoré in 1964. In 1967, Dumas, chairman and creative director at Hermès for nearly three decades from 1978 on, asked Catherine Chaillet to design a bag. Chaillet should be the first woman to design a handbag for Hermès. And her personal situation finds a declaration of love in this bag. Catherine Chaillet was pregnant during this time and the bag she designed in 1969 is named after the newborn child: Constance. And none other than fashion icon Jacky Kennedy was among the first fans of the Constance Bag.

Constance: A transformation in beauty

Hermès made the very first Constance bags exclusively in box calfskin leather or Porosus crocodile. The rather firm box calfskin leather gives the bag a firm stand, emphasizes its kinship with a saddle bag – which fits with the Hermès tradition – and made it look modern when paired with the sophisticated H clasp. Today, the Constance bag is available in numerous colors and leathers. Thus, the transformation from a classic to an elegant, sporty model that suits women of any age and any lifestyle – city and/or country – was successful. Always, these are the characteristics of the Constance bag: sleek, minimalist lines, a long shoulder strap for carrying over the shoulder or as a crossbody bag, and the form-fitting H clasp that distinguishes this bag from the Birkin and Kelly. It’s also the only one of the iconic Hermès bags with a large H clasp. But I’ll go into more detail about this clasp later.

Constance: a masterpiece for individualists

Behind the clean shape of a Constance bag are 14 to 18 hours of handwork in the Hermès workshops. Every stitch must fit perfectly, the worked leather must have the typically soft transitions, and of course the clasp as well as the strap holder must be perfectly fitted. Under its curved flap, the Constance bag is lined with lambskin and has one or two compartments and two slip pockets. Everything can be kept well sorted. Larger Constance versions have a zipper on the inner slip pocket. The shoulder strap fits into the two strap holders with millimeter precision – without the strap getting stuck uncomfortably. You can wear your Constance either long or short. A bag for day as well as night. And depending on the leather type and color, the Constance can look light as a feather or on the opposite sturdy – compatible with every life situation.

What seems quite natural to us today used to be rather unusual: the initials of the manufacturer in large letters on bags, garments and accessories. Especially in the house of Hermès, the H was not used as a design motif, while the Hermès lettering can definitely be found on older carrés. A bag with a large clasp on the flap that was both function and design was an absolute first for Hermès. Possibly the Constance bag would have gained far less fame without this unusual H clasp, because with this H clasp it corresponded to the new spirit of the age of a self-confident luxury or even Andy Warhol’s transformation of everyday brands into objects of art.

What is particularly striking about the Constance bag is the proportion between the bag and the H clasp. The clasp is placed in the lower half. The H is wide rather than filigree, giving the Constance a certain robustness and security. The H-shaped clasp is homogeneous and harmonious. The horizontal H-bar connects the flap, while the two lateral bars house the sophisticated mechanism. The perfection of these 3 bars in total is what makes the Constance design so unique. The H clasp of the Constance bag can be palladium, gold, leather or even diamond – the last two finishes are extremely rare in Hermès boutiques.

The Constance family and other details

If you are thinking about buying this beautiful bag, the first thing you should consider is the sizes. Currently, Hermès offers four model sizes. The Constance Mini, that is18 cm, and 24 cm, are the most common sizes you should choose between. In a Constance Mini will roughly fit a smartphone, wallet, keys and your Hermès lipstick, while the Constance 24 has more room to maneuver. Besides Mini and 24, there are also Micro models with 14 cm and Elan with 25 cm, which looks more rectangular. You should also pay close attention to the length of the shoulder straps, so that your Constance fits perfectly to your own look. On the vintage market, you may also come across rare examples, like the Constance Cartable, which measures 29 cm in diameter. Hermès also once had sizes 23 and 25 in its range. This attractive selection confirms the timeless appeal of the Constance bag.

Constance: Luxurious leathers and designs for not every day

ust as with Birkin and Kelly, the house of Hermès also gives the Constance model a very unusual design from time to time. This is when exotic leathers like ostrich or crocodile come into play. The Constance Marquette is coveted for its lizard skin inlay in the H buckle, which is paired with crocodile or alligator leather in a contrasting color. The Constance Verso is similarly rare because of its contrasting lining. For many Constance aficionados, the highlight is a Constance Tricolor, which combines three jewel-like hues in exotic skins.

Among the rare models on the secondary market are: The Constance “On A Summer Day” and “On A Summer Night,” designed by Irish architect Nigel Peake, born in 1981. They feature a graphic print on Swift leather in pop-bright tones or textured black. If you love the op-art look, a Constance Optique with Bridget Riley-like stripes and an enamel H-clasp might also be a dream. Currently, Hermès carries the Constance Marble Silk. Its surface is worked in a very special technique that is actually used for silk. This creates a beautiful interplay of pigments and material on the Constance. On the Constance, the exciting colors of Marble Silk shine in all their glory.

Constance is equally practical and stylish with its sleek, minimalist lines, long shoulder strap and iconic H clasp. Jackie Kennedy wasn’t the only one to have the Constance in several colors. This bag can perfectly complete a look and at the same time make a statement when made in exotic leather. Constance’s leather also requires regular care, but a beautiful patina also emphasizes its kinship with the saddle bag. Today, Constance bags are as rare in Hermès boutiques as Birkin and Kelly bags. And occasionally there are rumors that this model could be discontinued.