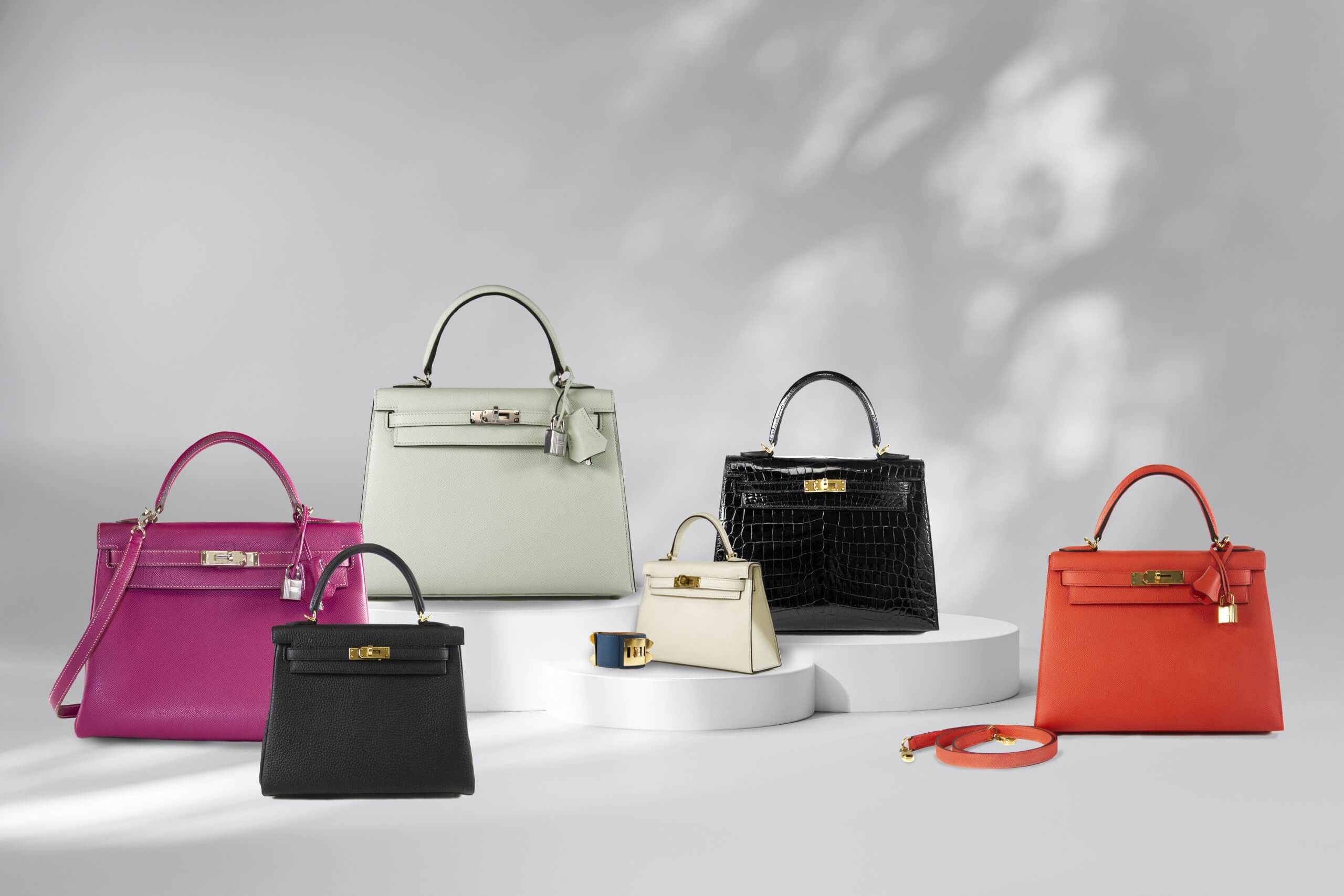 From the Kelly Mini Bag to the Kelly 50 Travel Bag.

A bag that is named after the legendary Grace Kelly. The most powerful women in the world are lining up to own one. We are talking about the legendary Kelly Bag from the French fashion house Hermès.

Kelly Bag: An icon in many variations

Retourne is a model made of soft leather and has rounded edges, which requires more care due to the soft leather, as it is exposed more to the risk of getting damaged. It is widely known that this model is ideal for travel and everyday use. The Sellier is technically a bit more complex and costs therefore more than the Retourne model. A Kelly Sellier bag has an angular shape and sharp corners and is considered as a more elegant and formal model for ladies.

In addition, a certain number of special collections of the Kelly family were launched, such as the Kelly shoulder bag (also the Kelly Danse), the Kelly Cut, the Kelly Mini Pochette, the Kelly Ghillies and the Kelly Picnic. The range of eight Kelly models goes from the mini bag with a width of 15-20 cm to the 50 cm travel bag. The sizes Kelly 28, Kelly 32 and Kelly 35 are perfect for a casual wardrobe, whilst the Kelly 40 such as the Kelly 50 are good travel companions. The smaller sizes, i.e. Kelly 15, Kelly 20 and Kelly 25 are ideal for the evening.

In this article I will talk about the Kelly Mini Bags and the Kelly 25.

The Hermès Kelly 25 has been existing since at least the early 1960s. Specimens from that time are extremely rare and feature the full size plaque hardware rather than the mini version we see on Kelly 25 and 20 bags today. An interesting fact is that Kelly 20 bags have been found to date from an earlier period than Kelly 25 bags, although they featured miniaturized hardware from the beginning. While the lock, key, and clochette have always been part of the security of Kelly 25 bags, a shoulder strap was not introduced until recently for this model.

Between 1976 and 1990, the early Kelly 25 had a strap with an X buckle at the end. Also starting in 1971, you could get a wide canvas strap with an X buckle or a narrow leather strap with an X buckle. Nowadays, this wider strap made of canvas is known as the Amazon strap. Starting in 1991, the X buckle was replaced by a round buckle, which has remained unchanged ever since. Palladium hardware was first used on the Kelly Bags in 1998, and around 2000 a second loop was added to the handles to make the straps easier to use. Since 2000, virtually no changes have been made to the design of Kelly bags, with one exception: the redesign of the Mini Kelly 20.

The oldest known Hermès Kelly 20 dates back to 1957. Back then, it had a medium length shoulder strap. The Kelly 20 cm came in two versions: one with a short handle and a separate long strap, and another model with a long strap without separate straps. The iconic round top handle, which has led collectors to refer to it as a bracelet handle, was not introduced until 1980. It took the fashion house Hermès another ten years before they introduced the Kelly 20 in retourne, a model that is extremely rare today. The last known Kelly 20 bag dates back to 2009, but models after 2004 are extremely rare. A revised, slimmer version that Hermès launched in 2016 is the Mini Kelly – or Mini Kelly II. In this version, the top handle and depth have been reduced. Hermès Kelly 20 bags never came with locks, keys or clochettes, although the models have featured shoulder straps since their introduction. It is extremely rare to find vintage Kelly 20 bags with double loops, as they were not envisioned when they were modified at the turn of the century.

Hermès also produced two series of rare 15 cm micro Kelly bags. The first of these were created from 1984-1985 and then again from 1991-1992. These Kelly bags were mainly made in Courchevel, Box, Lizard and Crocodile and featured extra thin straps such as extra small hardware. In 2011, Hermès introduced a new design for the 15 cm Micro-Kelly, this time in conjunction with Christophe Lemaire’s Candy Collection. The bags were made mainly of Swift or Epsom leather, but there were also models made of Lizard leather. These Hermès Micro Kelly bags were joined by the unique 15 cm Hermès Birkin bags, exclusively made for the Candy Collection. In 2012/2013 the bag had its comeback known as the Kelly Soir. The 15 cm model features a strap, which makes the Kelly 15 very unique. It is very delicate, almost like a rope, with a spring clasp at both ends.

In the past five years, the demand for small Kelly models has increased tremendously. The hype around mini bags has been going on for a few years now, although it wasn’t that long ago that Hermès didn’t produce many of them due to lack of demand, as most customers were more interested in 32 and 35 cm bags.